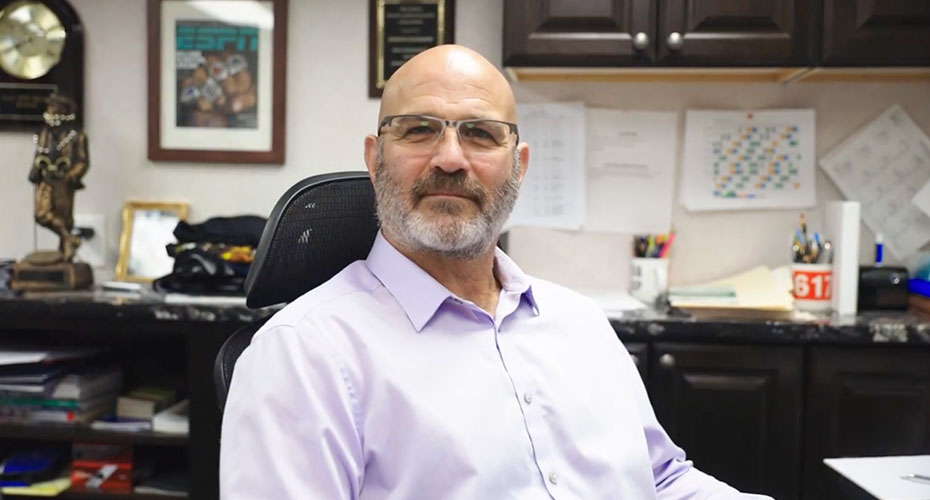 Making a difference, one day at a time

Jeff Saliba moved around a lot when he was a kid. “I always needed to fit in,” said the Peabody, Mass., resident.

When he made the varsity hockey team in ninth grade, his desire to fit in meant partying with his older teammates.

But what began as having fun at high school parties snowballed into a more serious problem by his 40s.

“I was at home by myself. I was isolating, and I couldn’t stop drinking. That’s when I knew I had a problem, and I knew I needed help,” Saliba recalled.

He reached out to his sister, who had gone through recovery a few years earlier. She helped him go to a detox facility and then to recovery meetings.

“I dove into recovery meetings,” he said. “It was a chance for me to start my life over.”

Saliba went on to earn a college degree and assume a leadership role at the Association of Heat & Frost Insulators & Allied Workers Local #6, where he had been a member for 28 years.

Now, he pays the help he received forward by serving as a sponsor to others with substance use disorder and creating policies at Local 6 to support those with the disease.

“We give workers struggling with alcohol and substance misuse the opportunity to come back to work if they agree to go to our Employee Assistance Program,” Saliba said. “We also started a Recovery Council with the Mass Building Trades that provides substance use programs and resources to members, including on-site recovery meetings every week. All of these programs have been very successful, and they allow our workers to get the help they need so they can get back to work and provide for their families.”

A common disease, with a steep toll

More than 40 million Americans – 14.5% of the population – reported experiencing a substance use disorder from 2019 to 2020, according to a federal report, with the disorder defined by two or more of the following characteristics exhibited within the last 12 months:

The majority, more than 28 million people, experienced alcohol use disorder.

Alcoholism is taking an increasing toll on American’s health during the pandemic, a recent federal study found. In 2020, the rate of deaths directly related to alcohol jumped to the highest rate recorded in at least 40 years.

Help is available. For example, the nonprofit insurer Blue Cross Blue Shield of Massachusetts is offering a variety of benefits to meet the needs of members.

“Mental health – including support for substance use disorder – is part of overall health,” said Dr. Greg Harris, a practicing psychiatrist and senior medical director, mental health, at Blue Cross. “Everything we do as a health plan tries to take that into account.”

An in-house mental health care management program staffed by specially trained nurses and social workers connects with members recently discharged from inpatient care to check whether they have therapists, are taking prescribed medication and can make it to counseling sessions. If necessary, the Blue Cross team may refer members to local social services agencies that can meet fundamental needs such as food and housing.

The health plan has reduced or eliminated member costs such as co-pays for medication-assisted treatment, expanded access to mental health care via telehealth, and offered new options to employers to allow them to waive cost-shares for therapy and medication.

Aiming to address a shortage of clinicians, Blue Cross has added new primary mental health groups to its network, including Thriveworks, Headway, and Refresh. These practices bring together independent psychiatrists, psychologists and therapists into networks that can meet the needs of a broad array of patients, including those dealing with substance use disorder, both in-person and through telehealth.

Other resources include Aware Recovery, which provides members with in-home recovery counseling and support delivered by a small care team that includes a therapist, social worker and recovery coach. DynamiCare is a digital platform that offers in-home testing and peer recovery coaches, with an app to connect the services to the member's family and treatment team. The insurer is partnering with Forge Health, a group that specializes in the treatment of substance use disorder, trauma and co-occurring conditions experienced by first responders.

We should be screening patients annually for mental health issues and substance use disorder just like we screen for diabetes, cancer and other medical conditions. This will help to normalize mental health care, as well as help us identify mental health concerns.

Saliba has been sober for more than 16 years, and credits the support he has received.

Now he aims to be that support for others.

“I believe that people aren’t living up to their potential when they’re drinking or doing drugs,” he said. “I saw it in myself, and I see it in other people. I can only suggest that if you are struggling with alcohol and drugs, reach out for help – there is always someone out there to help you.”

Are you a Blue Cross Blue Shield of Massachusetts member who is looking for help with a substance use disorder? Call 1-888-392-0098 or use our Find a Doctor & Estimate Costs tool to find licensed therapists. Check out more resources here.