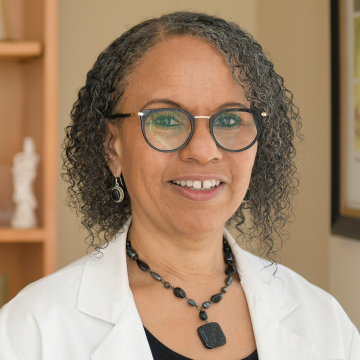 Dr. Valerie Stone is vice chair for diversity, equity, and inclusion, and the director of health equity initiatives of the department of medicine at Brigham and Women’s Hospital  Dr. Stone is an academic general internist as well as an HIV/AIDS focused infectious disease specialist and a professor of medicine at Harvard Medical School.

Prior to her current role at the Brigham, Dr. Stone was Chair of the Department of Medicine at Mount Auburn Hospital from 2014-19. Dr. Stone spent most of her career at Massachusetts General Hospital, where she was for many years the director of the primary care internal medicine residency program and associate chief of the division of general internal medicine. Dr. Stone also served as director of MGH women’s AIDS program for many years. When Dr. Stone was promoted to professor of medicine in 2011, she became the first African American to reach that milestone at Harvard Medical School in its history.

Dr. Stone is a nationally recognized expert on HIV/AIDS and is the author of numerous publications on HIV/AIDS care and policy, including the book “HIV/AIDS in U.S. Communities of Color,” which was published in its second edition in early 2021. Her research focuses on disparities in HIV/AIDS care by race and gender, and strategies for optimizing the care of the diverse patients living with HIV/AIDS.    Dr. Stone’s scholarship has also examined current issues in primary care, diversity in health care, health care leadership and innovations in residency training. Starting in 2020, Dr. Stone’s work increasingly focused on COVID-19: she serves as the senior advisor to the BWH COVID Equity Response Team.

Dr. Stone has been a longstanding leader in the American College of Physicians, having served on the ACP Board of Regents for four years and as chair of the ACP Education and Publications Committee for two years. She currently is the ACP representative on the AAMC’s Council of Faculty and Academic Societies. She was named a Master of the American College of Physicians in 2019. Dr. Stone is also a longstanding national leader of the Society of General Internal Medicine, having served on the SGIM Council for six years, and as chair of the SGIM Disparities Task Force for three years. Dr. Stone recently served a year as president of the Association of Chiefs and Leaders in General Internal Medicine in 2020.

Dr. Stone has received many awards for her career contributions, including the Elnora Rhodes Award for exceptional contributions to patient care, education and research in primary care from the Society of General Internal Medicine in 2012. In 2017, she was named one of the 50 most influential health care leaders of color by Boston Business Journal and received the Community Hero Award from Action for Boston Community Development. In 2020-21 she was awarded the W. Lester Henry Award from the American College of Physicians for advancing diversity in medicine and access to care, the Massachusetts Medical Society’s LGBTQ Health Award for advancing LGBTQ health, the Brigham Physician Organization Pillar Award for Outstanding Achievements in Faculty Development and Diversity, and the Harold Amos Diversity Award from Harvard Medical School.

‘The difference between life and death’