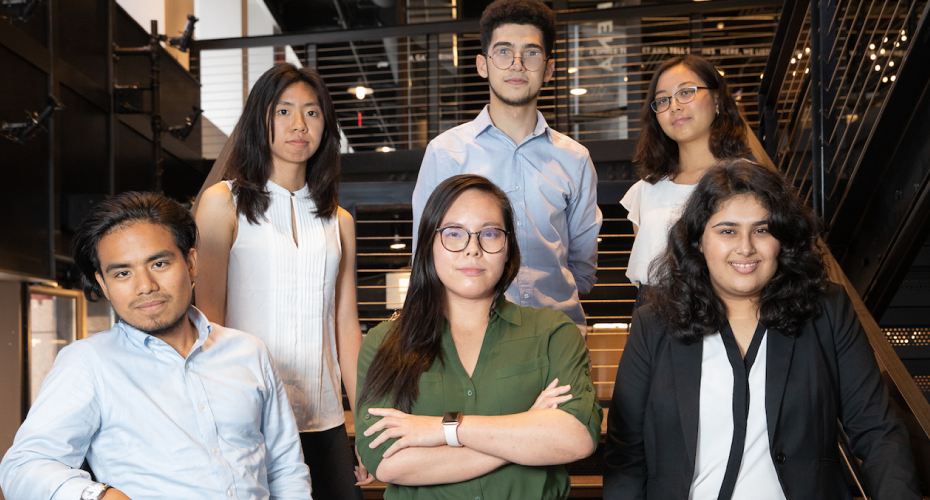 Diversity enhances technology and innovation, according to a group of young coders who are using their vibrant mosaic of experiences and viewpoints to break barriers in the Boston tech world.

The team of college students created a mental health app at TechTogether Boston’s “Hackathon” for women and nonbinary people and won internships with Blue Cross Blue Shield of Massachusetts. Along the way, they discovered their different perspectives and talents were the secret to their app’s success.

“I think everybody brings something different to the table,” said Leo Suarez, 22, who served as a mentor for the winning team, called Learn, Help, Connect! “A good chunk of the world is unappreciated. People have good ideas and because of their looks or whatever social stigma, we are not really paying attention to what we have.”

The tech industry has been slow to diversify: Only 11% of U.S. engineers are women, according to Department of Labor, and  only 26% of American coders are women. The TechTogether hackathon is aimed at that gender gap, and is designed to create an inclusive environment for talented coders.

The teams at TechTogether were tasked with finding a creative way to help people understand and support others with mental health challenges. The winning team created an app with a set of functions that allows users to tell the app how they are feeling and have the interface respond accordingly.

“If they say, ‘I really like my day today because I saw the ocean and it was pretty,’ it’s able to know the user is feeling a positive mood and asks, ‘Would you like to share your happiness with others?’” said Jia Yu Lin, a rising senior at Queens College, City University of New York.

“If the user says ‘I’m really sad, I lost my job today,’ it would take them to a page where it would show tips to be happier, exercises they can do, and if they really want to talk to someone, there are hotlines linked,” added Lin, 21, who shifted into the tech world after starting college as a physics major.

The team thought that having someone express their feelings in writing could be helpful, with the added bonus of the app being able to respond and connect users who were feeling happy with those who might have had a tough day.

The diversity of the team allowed them to empathize with users, they found. Each of the team members had a different journey that led them to technology as a passion and chosen career. For Sarah Wan, who attends New York Institute of Technology, it started with watching her brother play video games as a child and morphed into building her own computers.

Innovative industries benefit from having more women in the field, Wan said.

“A female and a male think very differently,” she said. “Including women in male-dominated fields, and vice versa, really brings out more ideas and creativity.”

The male predominance in the field nearly kept Rachel Tan, 20, another member of the LHC team, from switching over to computer science from her previous pursuits in art and design.

“I thought, ‘What if I am the only girl there?’ If there was more diversity, people might be more willing to go into the field.”

Tan, a rising junior at New York’s Hunter College, used her art background to help design the app and her teammates added the technological “personality” and functionality for the users.

“When I create art, it’s just me. If I am working with a team they tell me what I can improve on,” Tan said. “We worked together and through differences and it was enjoyable because it was nice hearing different suggestions.”

The winning team scored five summer internships working with Blue Cross’ digital and analytics team, and one member, Suarez, will start as a full stack developer for Blue Cross next summer.

“We were delighted to have these talented young people working with us on projects that align with our goals of driving down health care costs for our consumers, creating higher quality health outcomes, and providing exceptional consumer experience”, said Blue Cross‘ chief data and analytics officer, Himanshu Arora. “They brought new perspectives in problem-solving and ideating, and their diversity of backgrounds were a great asset to us.”

“Diversity and inclusion are essential to fostering a successful, innovative culture,” said Blue Cross’ vice president for talent acquisition and chief diversity & inclusion officer Stephanie Browne. “At Blue Cross, our goal is to ensure all employees help us create a diverse, inclusive and innovative culture. Our internship programs are an important facet of that, driving a pipeline of talent.”

Blue Cross employees served as mentors, judges and thought leaders in sponsored workshops for TechTogether, which drew more than 1,200 hackers.