A grandma takes charge, thanks to telemonitoring

Thanks to new technology, some find better health and less stress, with fewer nurse visits and hospitalizations

The 80-year-old grandmother was short of breath, had swollen ankles and had gained more than 10 pounds in a week — telltale signs of congestive heart failure.

CHF is a dangerous condition in which the heart can’t pump blood efficiently, depriving the body of oxygen and other nutrients.

That set off alarm bells for Blue Cross Blue Shield of Massachusetts nurse case manager Julie Aubin, who called Grogan last November for a routine follow-up conversation as part of her regular health plan. After hearing her patient’s symptoms, Aubin knew she needed to act fast.

Aubin told Grogan to call her doctor immediately and ask about increasing her diuretic medication.

She also recommended Grogan join the telemonitoring program the health plan had recently launched for Medicare Advantage members with CHF — one of the first insurance carriers in Massachusetts to offer such a program.

The telemonitoring program provides members like Grogan with simple “smart” equipment, including a scale and blood pressure cuff to use each morning. The equipment automatically sends the member’s vital signs to a visiting nurse, who monitors the numbers and can catch any potential problems early. The nurse communicates and coordinates with each member’s primary care physician and cardiologist as appropriate.

“With telemonitoring, you can keep people with heart failure in better shape longer, and they live longer,” said Dr. Renee Pekmezaris, vice president of community health and health services research at Northwell Health’s Feinstein Institute for Medical Research in Manhasset, N.Y., who has done extensive research on telemonitoring in heart failure patients.

Her most recent study, published last fall in Health Affairs, had striking findings.

Notably, Pekmezaris also found an increase in emergency department visits in that same six-month period. She attributes that to telemonitoring’s ability to help identify problems faster, enabling patients whose condition intensifies quickly to be directed to the ED and those with less intense symptoms to be treated at home, resulting in decreased mortality.

“This technology is doing exactly what it was built to do. It identifies exacerbations earlier and gets patients the care they need. You’re promptly recognizing an exacerbation, which results in decreased mortality for patients,” Pekmezaris said.

Grogan’s visiting nurse, Simone Carter of the Natick Visiting Nurses Association, above with Grogan, has seen the benefit of telemonitoring firsthand: dramatically reduced visits from visiting nurses and fewer hospitalizations among her patients, helping them avoid unnecessary financial burdens, undue stress and the possibility of hospital-acquired illnesses.

Reflecting on Grogan, Aubin, below, noted: “If we hadn’t stepped in, she likely would have had to go into the hospital. This saves the member the anguish of being in there, money, illness.” 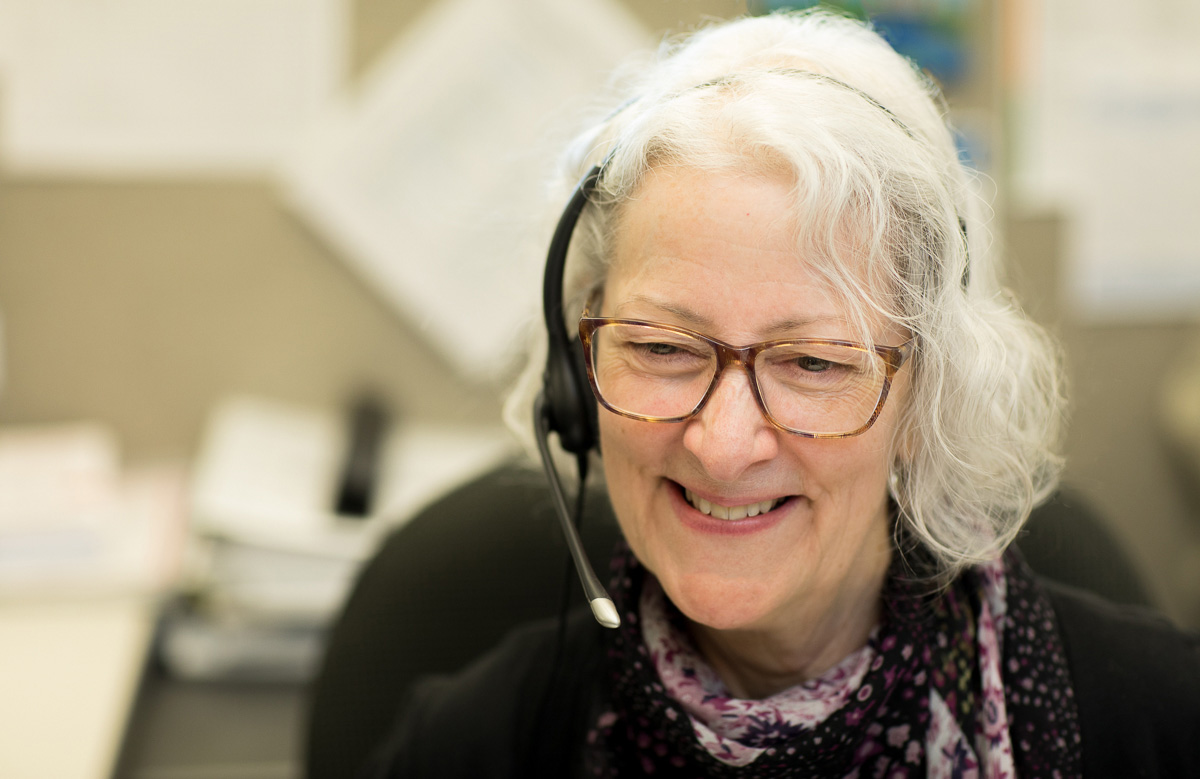 Patients in the driver’s seat

Within two days of Grogan joining the program, Carter installed the telemonitoring equipment in her home, and Grogan began taking her vitals every day — after making herself a cup of tea and feeding her cat.

“I was kind of excited about the program,” Grogan said. “I felt so much better knowing that someone else was keeping track of what was going on.”

Carter also taught Grogan how to identify red flags when her condition escalated, including sudden overnight weight gain or difficulty breathing and puffy ankles, and educated her about how to better manage her condition with lifestyle changes such as eating a low-sodium diet.

“As clinicians, if you can get in early and do some teaching when a patient is still healthy enough, you can effect change. It’s better for everyone, especially the patient,” she said.

“Telemonitoring puts patients in the driver’s seat and lets them get back to living their life.”

The program helped instill positive habits in Grogan that will continue to benefit her, Aubin said: “Pat had a good couple of months of eyes-on care, and it gave her a good boost into forming this habit of weighing herself and paying attention to her symptoms. She’s come a long way.”

Four months later, Grogan agrees. Even though she is no longer in the program, she still weighs herself every morning and is trying to eat better, keep an eye on her sodium intake and monitor those telltale danger signs. She even bought herself a new scale for Christmas.

“This program was a godsend for me,” she said.

Pekmezaris’ study found no decrease in the rate of death after one year post-hospital discharge. She is now focused on determining how to extend the benefits of telemonitoring to more patients, and for longer than that initial six months post-hospitalization.

Telemonitoring is more cost effective than other types of care, she notes, and as seniors get increasingly tech-savvy, they are more likely to adopt it.

She believes the opportunity lies in using the technology to monitor patients not just after they leave the hospital but several months later when they are trying to manage their condition day to day.

“The data suggests there is definitely a way to get more benefit out of this technology after 60 days of home care,” she said. “That is where I think the sweet spot is.”