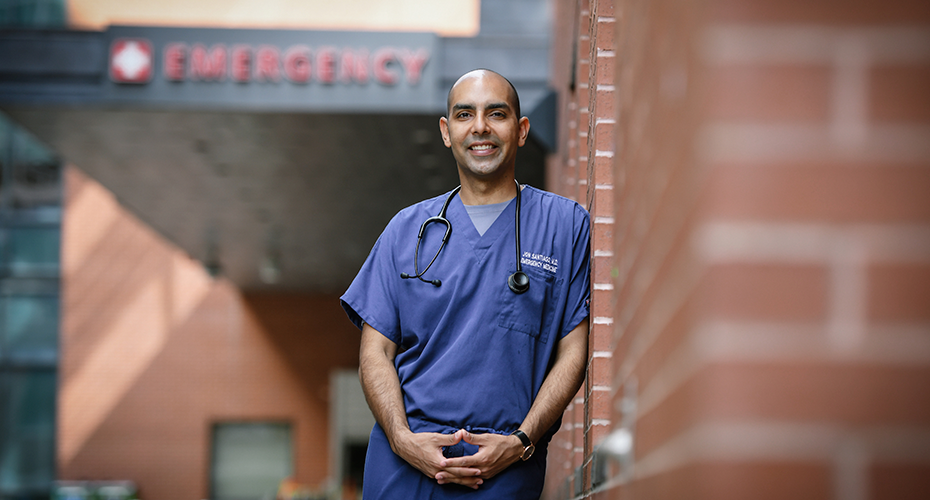 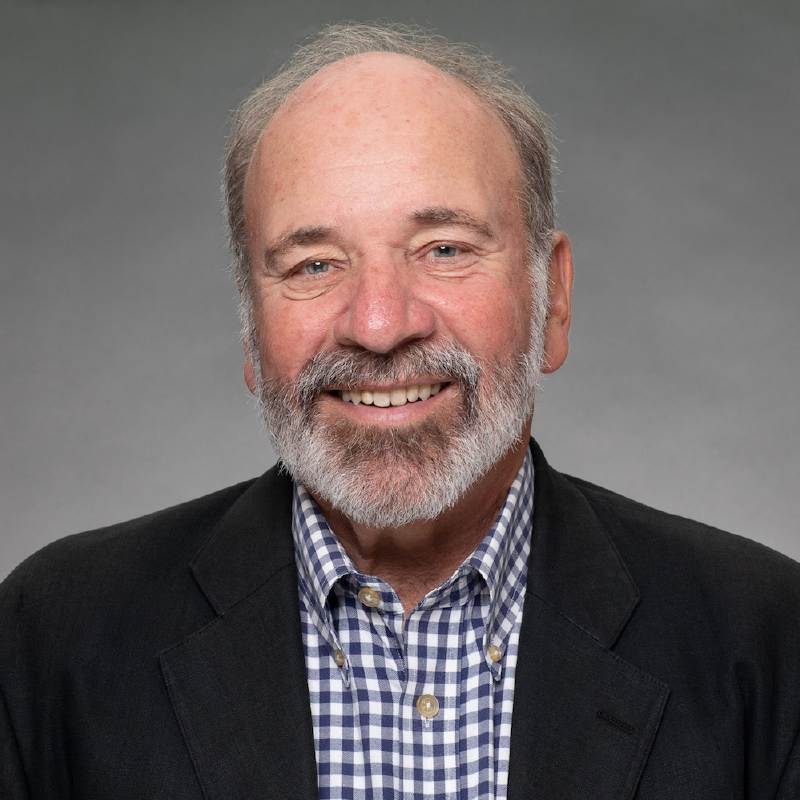 “Good morning everyone, it’s about 7:45 on Monday, I just finished my third shift in a row in the ER.”

The stubble shadow on Dr. Jon Santiago’s face traces the exhaustion of this 37-year-old physician as he stands in his scrubs outside Boston Medical Center and offers yet another dispatch for a passionate social media following.

“As some of you may know, I’ve been working the last couple of weekends, Friday, Saturday and Sunday, so I’m able to watch the progression of how we treat and care for our COVID-19 patients.”

Since he spoke those words back in early March, when the COVID-19 surge was beginning to flood emergency rooms across the city and state, this 37-year-old physician has logged 17 straight weekend shifts in the ER at Boston Medical Center.

“The situation in this state has improved,” he said recently. “We don’t have many hospitals undergoing surge capacity. Still, there are a couple of red flags: Given the re-opening of the economy and the massive demonstrations we’ve seen in the wake of the George Floyd killing, thousands of people have been in close contact, and I’m not seeing the level of interest when it comes to wearing masks or practicing social distancing. These are all very concerning things to me, because a second surge could well be deadlier than the first -- that was the case in the 1918 pandemic.”

There is an Ishmael-like quality to Jon Santiago’s posts from the front lines of the COVID pandemic. He has assumed the role of narrator in the local struggle to battle a virus already mythic in its lethal reach across the globe.

Dr. Santiago’s posts provide an unfiltered account of what it’s like to go up against an invisible menace, one for which we have no vaccine, and one that has already claimed more lives in a few short months than were lost in the last few wars.

Yet long before COVID-19 exposed the holes in our delivery of healthcare, before personal protective equipment became part of our vocabulary and facemasks part of our daily wardrobe, Dr. Jon Santiago had already chosen to practice medicine on the front lines.

For this ER physician, born in Puerto Rico and raised in subsidized housing in the South End, the ER at “City” was more than the only place he wanted to practice medicine.

It was where he needed to practice medicine.

He had traveled abroad on a Fulbright Scholarship, joined the Army Reserves and received his degree from Yale Medical School. Yet there was one thing he knew for sure: Well before the novel coronavirus radically redefined the medical landscape, Jon Santiago believed, “The ER was essentially the place where failed public policy presents itself.”

In other words, what he saw in the ER was the failure of a larger world of politicians and lawmakers to provide answers for why the multiple scourges of guns, gang violence, drugs, poverty and homelessness always play out in the ER.

The fear and terror he sees in the eyes of gunshot victims, or the desolation on the faces of the homeless who either drift, or are ferried in off the street to ask “Where do I go? I have no home,” convinced Santiago that the care he was giving could only do so much and go so far. 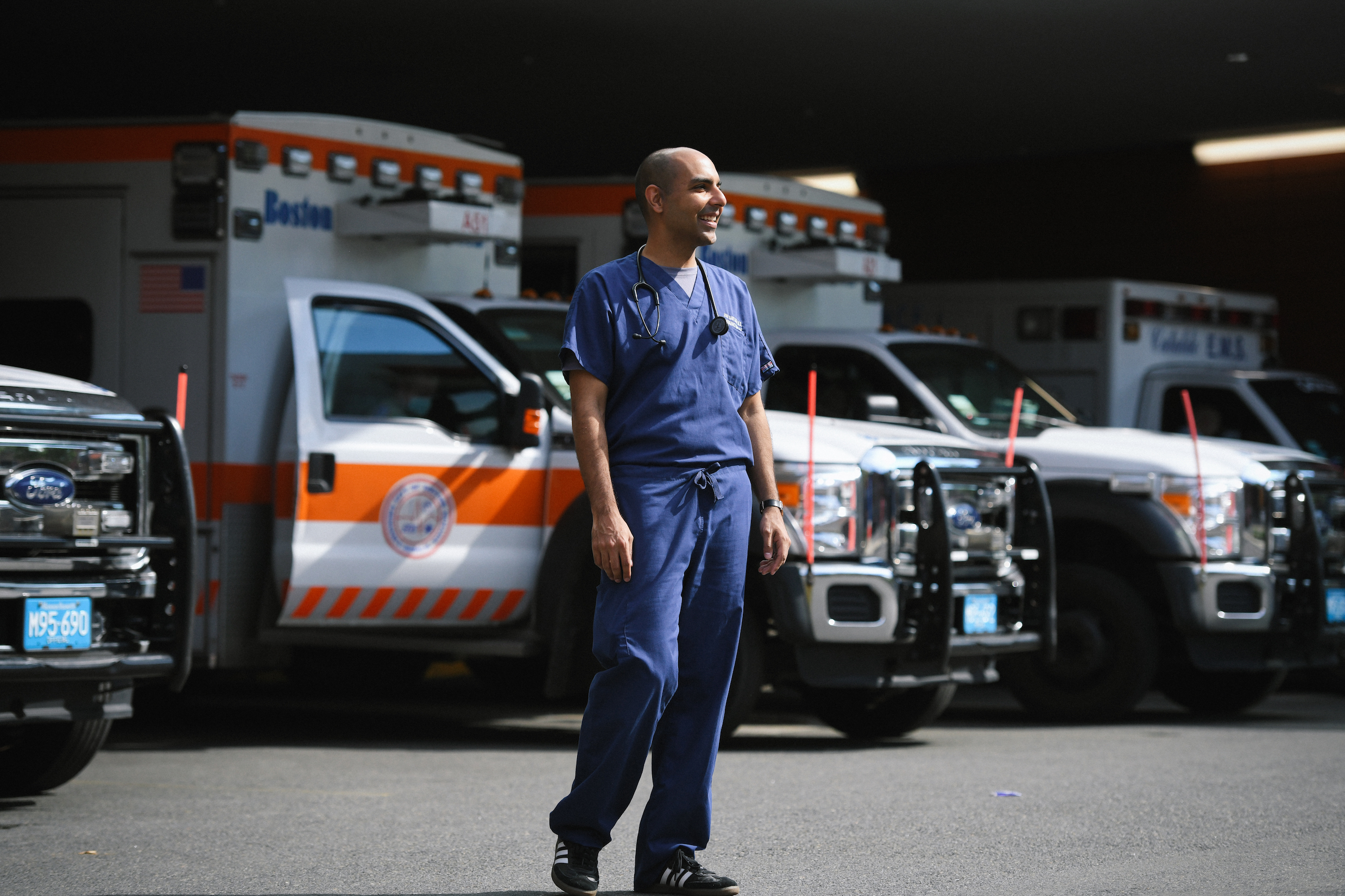 Having already involved himself in his South End community, Santiago chose to run for the Ninth District seat in 2018.

Now, the dual roles of ER doctor and state representative provide Santiago with a singular ability to assess the pandemic from the inside out.

As a physician, he can look into the desperate eyes of a COVID patient who wants to know, “Am I going to die?” or “Will I go home again”? He can take his place beside colleagues working 12- and 13-hour shifts, risking their own lives in the process of intubating the old and young in the throes of COVID-19.

As a politician, he can express his frustration at how this pandemic has been misrepresented by some.

“We can’t have leaders of the country spewing nonsense and lying about quick fixes and miracle cures,” Santiago said. “It works against everything we’re trying to do."

Social distancing is crucial. Wearing a mask is crucial. We don’t know what lies ahead, but pretending this will, somehow all fade away in the summer, or by the fall…that is irresponsible as well as dangerous.

Up in the marbled corridors of the State House, he joins the state’s effort to flatten the curve. Though that curve appears to be heading in the right direction of late, the death toll is still staggering.

On that not so distant morning in March when Jon Santiago came off the last of his three shifts in the ER, Suffolk County had registered 617 Covid cases with 78 deaths.

Barely more than two months later, those numbers had ballooned to 17,873 reported cases in Suffolk County alone and 868 deaths.

“Although we have been able to beat back the surge,” Jon Santiago said recently, “we are still on a tenuous plateau. The overall numbers are encouraging, but there are still hard-hit places that have yet to be adequately addressed.

“My concern,” he said, “is that the possibility of a second surge is not only very real but probable, considering the experiences of other countries and states. A vaccine is still many months away.”

At the moment, the young doctor and state rep finds himself at the crossroads, caught between two different viruses: the pandemic of Covid-19 and the epidemic of race.

“I think it’s important to recognize the disproportionate impact the coronavirus has had on communities of color,” Jon Santiago said. “The fact that black men like George Floyd are still being murdered in police custody is a symptom of systemic racism, no less daunting than the novel coronavirus before us.”