Watching her 5-year-old daughter, Karena, glide across a YMCA pool on a recent weekend, Channel Mejia breathed a sigh of relief.

“It’s a life skill, being able to swim and not being scared of the water,” said Mejia, 31, as Karena paddled around in her cheetah print bathing suit. “She was a little scared at the beginning, but she has warmed up to it and she is loving it.”

Karena is taking part in a new City of Boston program sponsored by Blue Cross Blue Shield of Massachusetts and the YMCA of Greater Boston that provides free 8-week swim lessons for children and their families. The program is designed to provide greater health equity to minority communities and combat the stark racial disparities in drowning deaths.

“We want to make sure people can be as safe as possible when they are enjoying our pools and our city’s waterfront,” said YMCA president and CEO James Morton, who added that the program is initially focused on YMCA branches in communities of color.

The goal this year is to teach 600 young people to swim, and to train 60 high school students to be lifeguards to address a chronic shortage. Ultimately, the hope is to provide all 4,000 of Boston’s third-grade students with access to lessons so they can enjoy the health and safety benefits that flow from being able to swim.

Former Boston Mayor Kim Janey created the Swim Safely program after the summer of 2021, when Massachusetts suffered an unprecedented rate of drowning deaths. Nationwide, drowning is a leading cause of death in children under the age of 14 and, for reasons stemming from structural racism, Black children ages 10-14 are 7 times more likely to drown than white children of the same age.

According to the American Red Cross, swimming lessons reduce the risk of drowning by 88 percent. Swimming also provides a boost to cardiovascular health, improved muscle tone and strength, and an opportunity to combat childhood obesity.

The lessons are particularly in demand after two years of pandemic canceled many swim programs.

On a recent Saturday morning at the YMCA’s Roxbury branch, more than a dozen children swam, splashed, and smiled during an hour-long lesson that, for some, was too short. 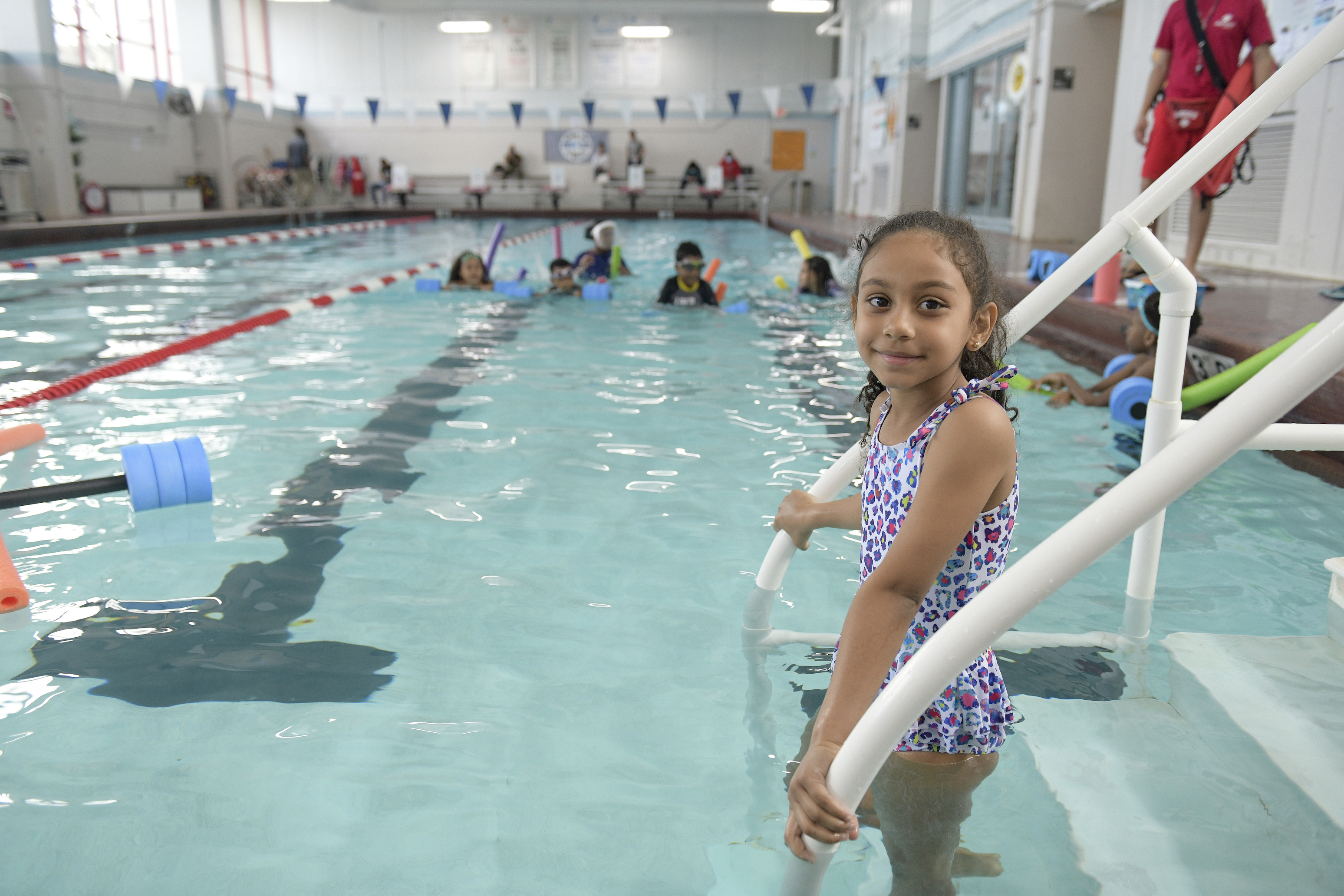 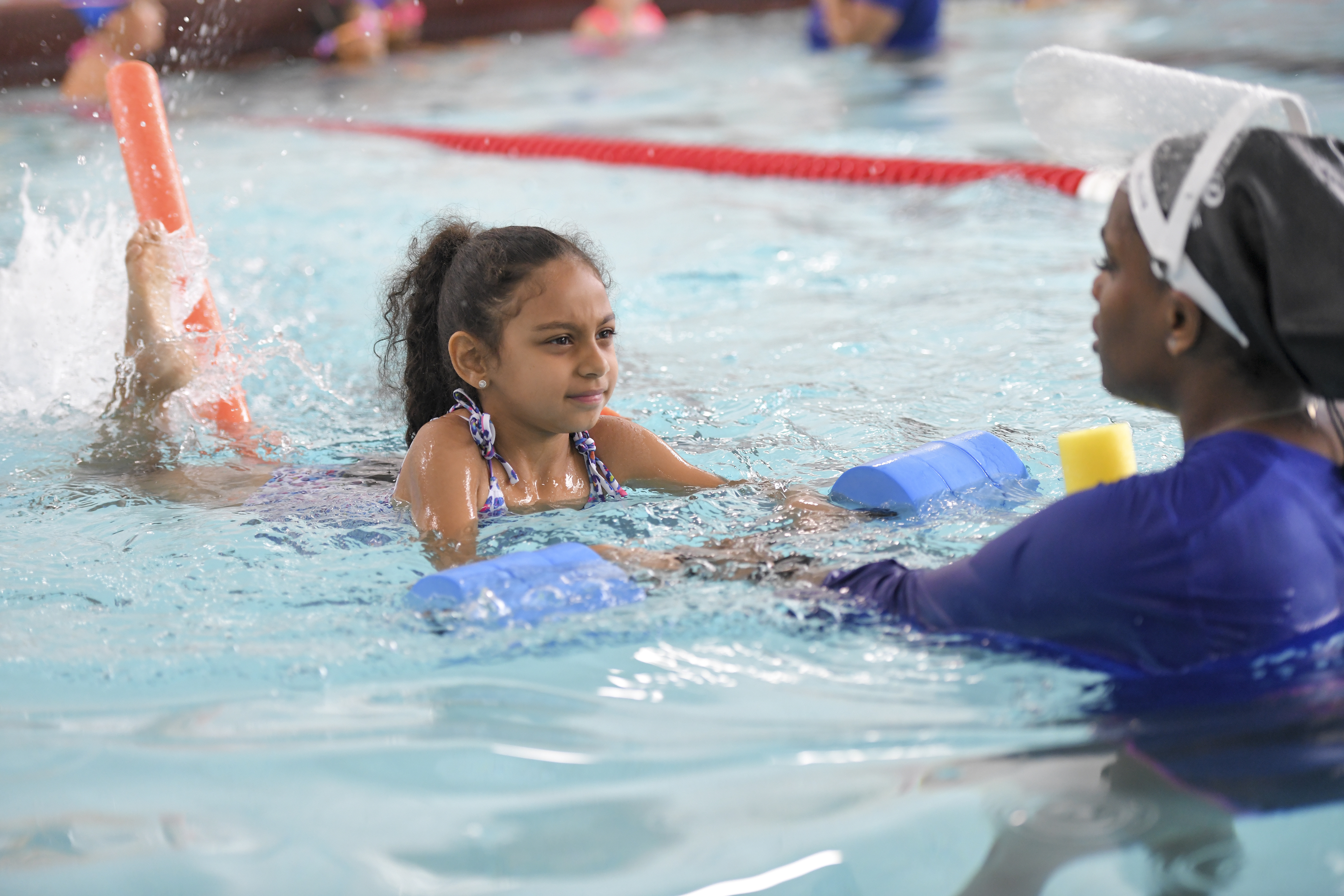 After her lesson, Karena said her favorite part of class is jumping in the pool.

Her mother said she’s trying to overcome her own hesitations about the water.

“I want to set a good example for Karena, Meijia said. “I’m learning to swim myself.”

Daly Richelieu-Hamilton, 37, the Roxbury YMCA’s aquatics director, said it’s not uncommon for entire families to get hooked on swimming.

“It’s not just that it’s a free program, it’s that we provide a boost of encouragement,” Richelieu-Hamilton said. “We encourage families to come and take advantage of it, come in the door. And once they are in the door, trust me, they aren’t leaving.”

Seven-year-old Kayson Gomes Carvalho is one of those young swimming converts. He said he loves the pool.

“I really want to learn how to swim,” he said. “I just really like the water.” 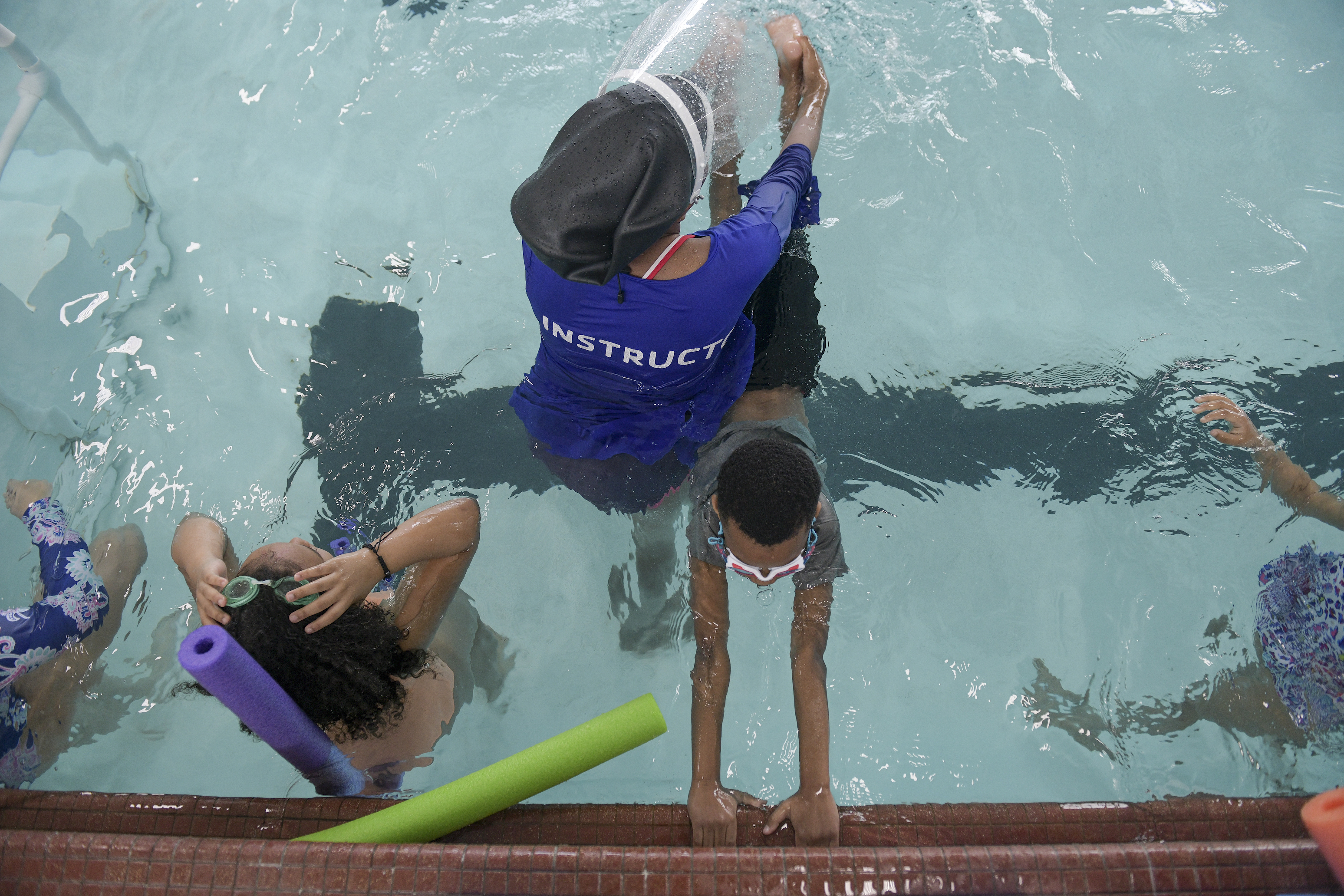 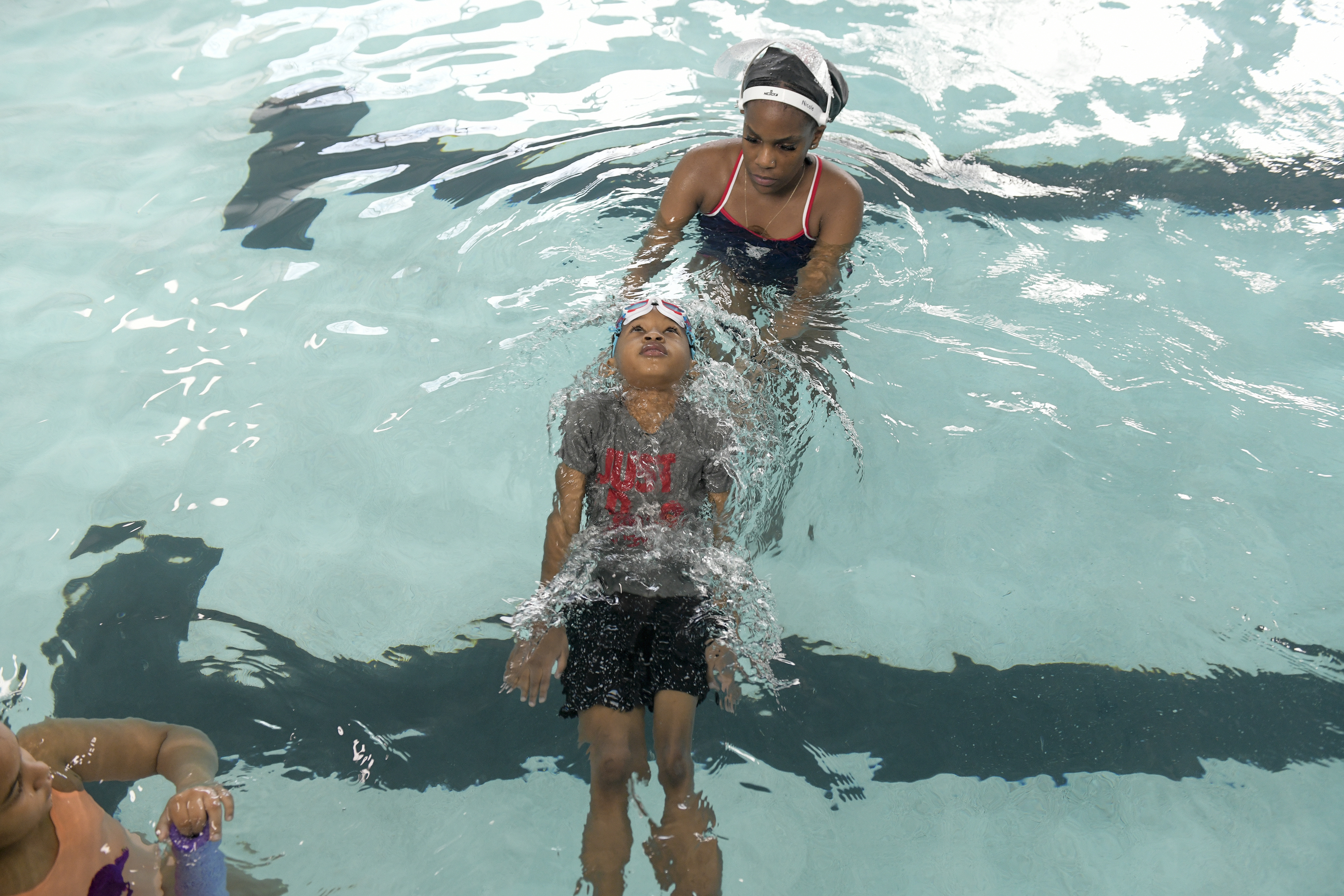 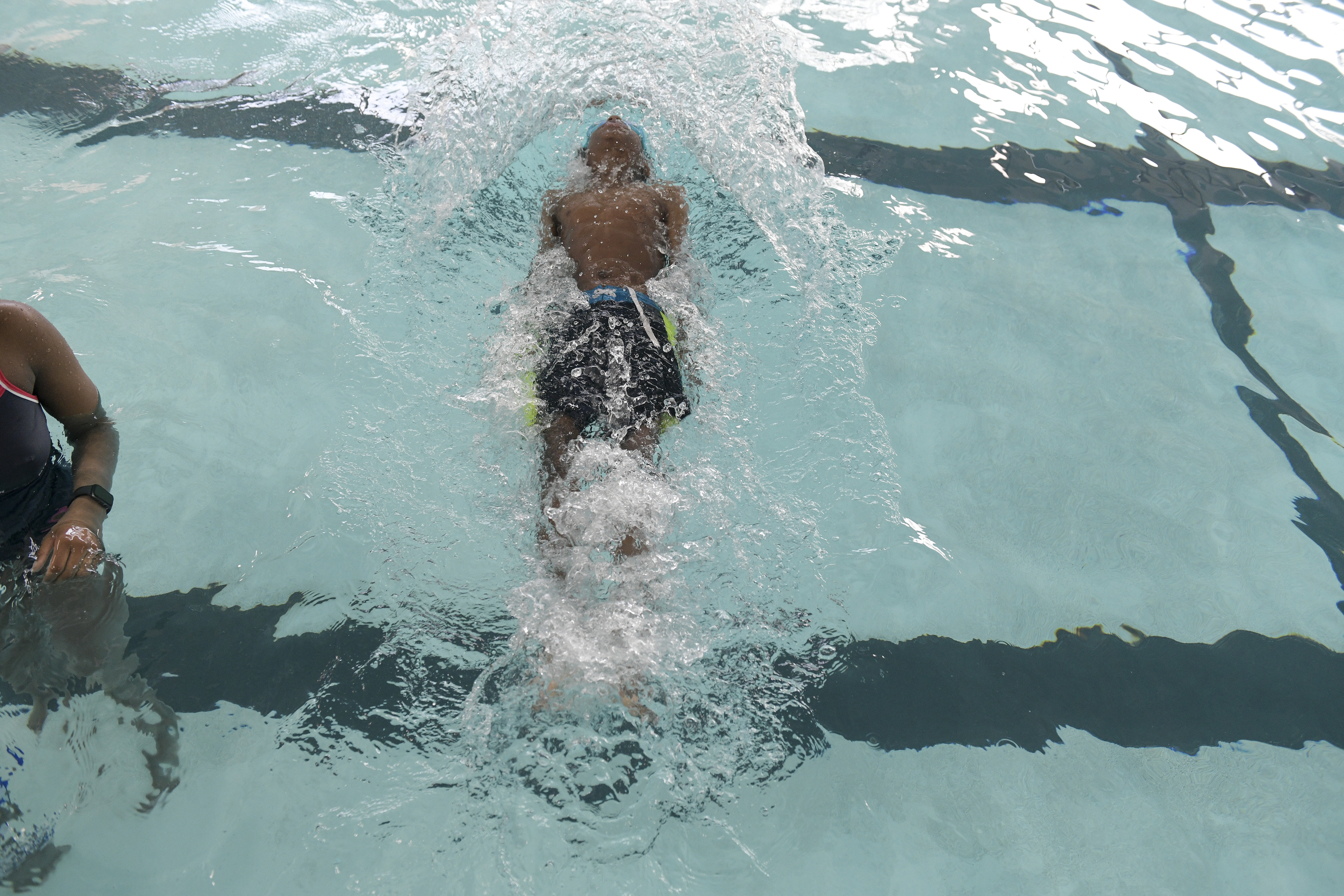 His mother, Celly Gomes, 28, said she is proud of her sons, both of whom signed up for the free program. Despite being taught to be afraid of the water while growing up in Cape Verde, Gomes said she decided to take the plunge and take lessons herself.

“I am still a little scared, because I am not comfortable with the water, but I feel like I am doing much better,” she said. “I am going to keep coming here until I reach my goal and learn how to swim.”