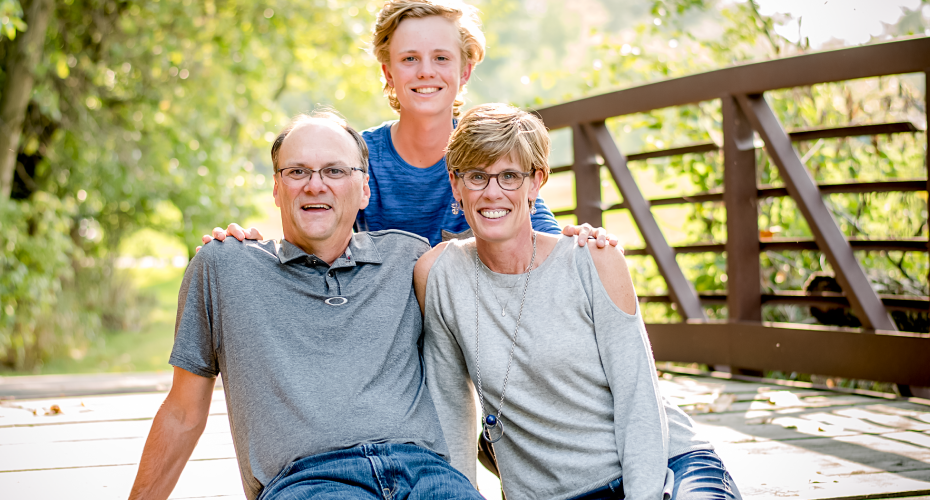 The HPV vaccine can prevent cancer. Yet, teens are far less likely to receive it than other vaccines. A family shares their story of why they are determined to change that.

The Scharingson family’s nightmare began in December 2015 when Jon Scharingson noticed a bump on the left side of his neck. “He figured the lump was a swollen gland due to a respiratory infection,” his wife, Kris, recalled in a recent interview. But after six weeks, several doctor’s appointments, an ultrasound, a CT scan and a biopsy, the Ankeny, Iowa, natives learned that Jon had throat cancer caused by the human papillomavirus, or HPV. And that began a journey from hell, said Kris  (above with her husband and their son).

Jon underwent 35 radiation and two chemotherapy treatments over seven weeks, which caused intense burning in his mouth and throat, resulting in his total dependence on a feeding tube for all nutrition and fluids, and high-dosage opioid patches with IV pain medication for pain control.

"Even though he finished treatment in April 2016, he was unable to swallow until the end of August," Kris said. "He had to go through opioid withdrawal and did not return to work full-time until November." Jon, an executive director of sales and marketing for a renewable energy company, will endure lifelong side effects from the treatment, including dental problems, dry mouth, severely diminished taste buds, equilibrium issues and permanent damage to his lymph nodes.

HPV, the virus that caused Jon’s cancer, is common, sexually transmitted and in the small, dangerous class of viruses that can lead to cancer — in this case, cervical, vaginal, vulvar, anal, penile and throat cancers. Nationally, almost 34,000 men and women are diagnosed with HPV-related cancers each year. Cervical cancer is one of the most prevalent, with 13,000 new women diagnosed each year nationwide and the cancer claiming 4,000 lives. Among Blue Cross Blue Shield of Massachusetts’ commercial membership, about 3,500 members are diagnosed annually with HPV-related cancers, with 90% of new diagnoses occurring among women and 66% among members aged 46-64. Its prevalence and its potential deadliness makes HPV notable.

Something else makes it notable too: Unlike almost all other causes of cancer, it is preventable with a vaccine

“The HPV vaccine is one of only two vaccines we have to prevent cancer,” - Dr. Katherine Dallow, vice president of clinical programs and strategy at Blue Cross Blue Shield of Massachusetts

And, Dallow notes, the other virus we have a vaccine for, hepatitis B, results in cancer much less often than HPV. The HPV vaccine protects against nine strains of the virus with the greatest risk of causing cancer. The Centers for Disease Control recommend that girls and boys get the HPV vaccine, which consists of two shots, between ages 9 to 12 so they have the best chance of developing immunity before they become sexually active and may be exposed to the virus. Once teens turn 15, they need to have a three-shot series to protect against HPV.

Overwhelming clinical evidence has shown the safety and efficacy of the vaccine, which was first introduced more than a decade ago. However, unlike many other vaccines including hepatitis B, the HPV vaccine is not mandated for schools and camps. It’s given in several doses that require multiple doctor visits, and some parents have resisted the CDC recommendation. As a result, HPV vaccination rates often lag the rates for other vaccines recommended for adolescents. Ninety percent of teens receive the Tdap vaccine for tetanus, diphtheria and pertussis and the vaccine for meningococcal infections, but only 30 percent are vaccinated for HPV, according to Blue Cross data.

“The association between this virus and sexual activity can be a huge hurdle for parents to get over,” Dallow said, but she wonders, “If there were a vaccine to prevent colon cancer or breast cancer, would people be declining it at these rates? People would be lining up regardless of the method of transmission.”

“Talking about the cancer side of this hits home to people,” agreed Dr. Alan Stern, a pediatrician in Needham, Mass., who recommends that all of his patients get the vaccine by age 12. “Unfortunately, now we’re seeing an epidemic of HPV-related cancers among people in their 30s, 40s and 50s. We hope to prevent that from happening to kids today several decades down the road.” After a decade of research, Stern notes, the vaccine has proved safe and effective with only mild side effects such as occasional arm soreness and lightheadedness. And thanks to more education in schools about the vaccine and more awareness about HPV-related cancers broadly, Stern says, he finds parents are increasingly open to the vaccine for their children.

Kris Scharingson is among them. In fact, both she and her husband are fierce advocates for the HPV vaccine and are involved with the American Cancer Society, the Iowa Department of Public Health and the Iowa Cancer Consortium. At the end of March 2016, as her husband was finishing his third week of treatment for HPV-related throat cancer, Kris drove her 16-year-old son Matthew to the doctor for his final HPV shot. Though kids never want to get shots, Kris said this was one shot Matthew was happy he could get. "Our goal," she said, "is that he will never have to go through the pain and suffering he watched his dad go through."