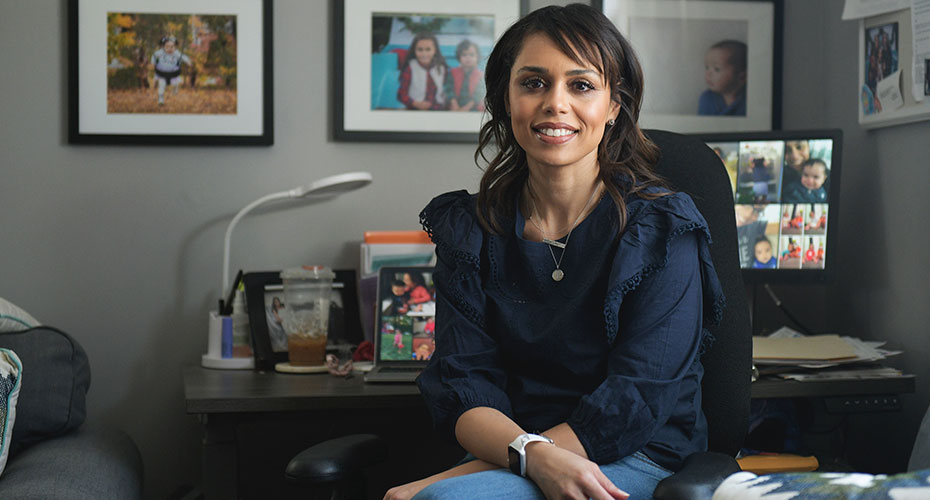 The power of antidepressants and therapy

A young mom, one of the 21 million Americans who suffer from major depression, shares her mental health journey

At 37, Stephanie Hansbury, a mom of two, was diagnosed with a rare form of breast cancer that led to a double mastectomy and a series of chemotherapy appointments, endured alone due to COVID protocols.

It was a brutal ordeal, and through it all, she had one fear.

“I was terrified when I was diagnosed that I would not be able to take care of my kids,” she recalls.

She was pronounced cancer-free in April 2021, but the mental toll had just begun to hit home.

“During my treatment, I went on automatic. Everyone told me, ‘You’re doing so well,’ and I thought, ‘What else am I supposed to do?’ I think I had been suppressing everything to get through it, so when it was over, there were days when I didn’t get out of bed. I couldn’t motivate myself to do anything.”

Hansbury was suffering from major depression, a mental health condition that brings a despairing mood and loss of pleasure and interest in activities to the point where it impairs functioning and daily life. The condition, which can stem from biochemical imbalances and can be triggered by stressors, affects an average 21 million Americans annually.

Last summer, Hansbury began getting counseling from a psychologist and seeing a psychiatrist, who prescribed an antidepressant. At first, she didn’t want to take medication, but today, she’s glad she did.

“It took a little bit of time to kick in, and my psychiatrist and I had to adjust the dosage a few times, but I’ve really settled in now,” she said.

Several months later, Hansbury said, “I’m feeling a lot better. I think it took a while for the magnitude of what I had been through to register and for me to realize after my cancer diagnosis and treatment that I was not going to be the same person. I was not just going to put it behind me. This is a part of me now.”

The effectiveness of antidepressants stems from the brain’s complex biochemistry, where hormones such as serotonin work in a delicate circuit to regulate mood, said Dr. Greg Harris, a practicing psychiatrist and senior medical director of behavioral health at Blue Cross Blue Shield of Massachusetts.

“Antidepressants make sure that circuit is functioning well, which can help improve your mood, sleep, energy, concentration and motivation, while psychotherapy can help you build better skills, habits and patterns that also can elevate your mood and help you maintain your mental health.”

As with any medication, patients should be aware of how antidepressants work.

Depression can strike anyone, but historically, access to mental health treatment has been less equitable.

“Not all of our communities have been well served by medicine in general and psychiatry in particular,” Harris said. “We need to acknowledge the disparities that exist and do things differently moving forward. At Blue Cross, we’re endeavoring to do better.”

In response, Blue Cross is collaborating closely with the medical community to examine and address underlying causes of inequities. The health plan is also expanding its network of mental health clinicians, adding more than 1,200 in 2021.

“It’s a work in progress, but this is a priority for us as a health plan," Harris said.

When it comes to mental health, information is power, Williams said.

Harris says getting access to the right mental health care can be life-changing.

I tell my patients how brave it is to face depression head on and how important it is to own the illness and not let it own you.

“And I remind them that we have medications we didn’t have 100 years ago to help treat this condition that can help them improve their quality of life and take care of themselves and their family.”

Hansbury has become an advocate of such proactive approaches.

“If you feel something is wrong—physically or emotionally—don’t ignore it. Keep pushing until you get an answer,” she said. “And make sure you find a provider you trust. It’s not always easy to find a provider you fit with, but I encourage people to keep trying. It’s worth it for your health.”

Are you a Blue Cross Blue Shield of Massachusetts member who is looking for a therapist? Call 1-888-389-7764 or use our Find a Doctor & Estimate Costs tool to find licensed therapists.

If your plan includes our telehealth benefit, you can talk to a licensed professional remotely using Well Connection via your smartphone or computer -- it’s convenient and confidential. Get started.