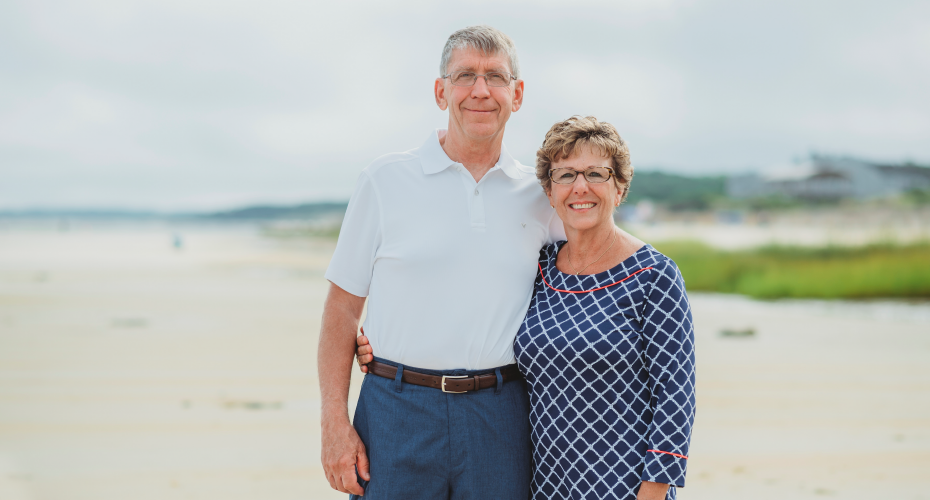 A voice in the darkness: How a nurse formed a special bond with a family in anguish

During the hardest times, help can sometimes come from a simple phone call.

“Honestly, I don’t know how I would have gotten through this without her,” Blue Cross Blue Shield of Massachusetts Medex member Ann Bunyan said about the support she has received from Blue Cross nurse case manager Donna Buonopane-Johnson (pictured below) during what has been an especially painful six months for her family.

Last summer, Bunyan and her 67-year old husband Jim vacationed on the Cape, as they do every year., and the couple posed for a picture on the beach to remember the trip, above. One month later, Jim became seriously ill and was eventually diagnosed with West Nile encephalitis, a mosquito-borne virus that attacks the brain and muscles. The virus left him completely paralyzed and unable to breathe or eat on his own.

That’s when Bunyan called member services for help and was connected to Buonopane-Johnson, who listened to the story and went beyond her regular responsibilities to research the family’s options. Buonopane-Johnson learned that, unlike Massachusetts, New York State does not have long-term acute care hospitals, which are often the next step down from a hospital and are equipped to care for patients with complex medical needs such as those who are on a ventilator or have a tracheostomy.

While Ann Bunyan ultimately decided to transfer her husband to a long-term acute care hospital in Connecticut because Medicare would not pay for the facilities in Massachusetts, she praised Buonopane-Johnson for her dedication. She even took the time to write a letter to us to express her gratitude.

“Donna was a godsend to me,” she said in a recent interview. “She’s gone above and beyond and was more helpful than anyone I have dealt with through this entire process, including social workers and staff employed by the hospitals and various facilities. She doesn’t even know Jim or I, and yet she was caring from the very beginning.”

Buonopane-Johnson has been at Blue Cross for 15 years, spending the last 12 as a nurse case manager. She was overwhelmed by Bunyan’s praise – and filled with admiration for her tenacity and strength.

“She’s just an amazing woman, an amazing advocate,” she said. “I can’t tell you what she’s done for her husband.”

While Jim Bunynan’s prognosis is uncertain, his wife is glad that he is making progress, however slow it may be. Recently, he was able to breathe on his own for 16 hours, and he also regained some movement throughout his body that may enable him to get an electric wheelchair.

The family is hopeful that someday Bunyan will regain full movement in his body and be able to walk again. But for now, his wife is just looking forward to the day when she can finally take her husband home. And next year, she hopes they can once again return to the Cape.