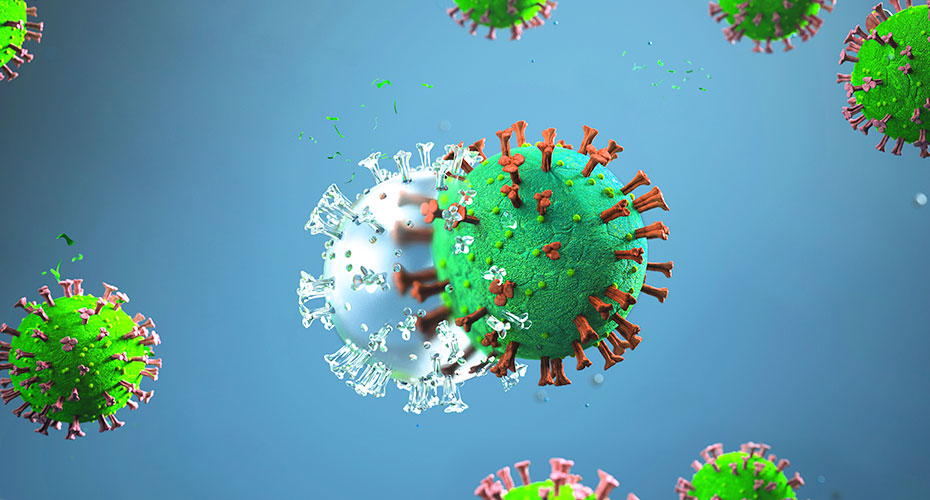 Yes, vaccines work against the mutated virus, and answers to other common questions from an infectious disease expert

Highly effective COVID-19 vaccines are protecting hundreds of millions of people across the globe, but infection rates remain stubbornly high in many regions, in part due to new versions, or variants, of the virus.

The U.S. — and the world at large —are currently in a race to vaccinate as many people as quickly as possible before these more transmissible variants can take hold.

Coverage talked to Dr. Daniel Kuritzkes, chief of infectious disease at Brigham and Women’s Hospital, about what we know so far about these variants, what remains unclear, and how the public can protect against new mutations of the virus.

Viruses often change when they are passed from person to person, a natural process of evolution, Kuritzkes said. These changes are called “mutations,” and a virus with one or more new mutations is a “variant” of the original virus.

“We know the virus is continuing to change, and this reflects its ongoing adaptation,” he said. “We have seen the emergence of variants almost from the time the virus first was discovered.”

Most of the time, a mutation has no effect on how infectious or dangerous a virus is. Often, the new variant disappears after a short time. But sometimes, variants can cause a virus to be more severe, spread more easily between humans, require different treatments, or impede the effectiveness of current vaccines.

Scientists have been monitoring the changes in SARS-CoV2, the virus that causes COVID-19, and have found thousands of variants, most no more dangerous or infectious than the original virus.

What do we know about the new SARS-CoV2 variants?

There are six variants researchers are currently watching particularly closely, because they seem to spread more easily among the unvaccinated.

One variant, which was first identified in India and is known as "Delta," is now the dominant strain in the United States.

Studies indicate the vaccines from Johnson & Johnson, Pfizer and Moderna provide strong protection against severe illness caused by Delta and other variants.

""People who are fully vaccinated are protected from severe disease and death, including from the variants currently circulating in the country such as Delta," the FDA and CDC said in a recent statement. "People who are not vaccinated remain at risk. Virtually all COVID-19 hospitalizations and deaths are among those who are unvaccinated. We encourage Americans who have not yet been vaccinated to get vaccinated as soon as possible to protect themselves and their community."

There may be more “breakthrough” infections from the variants in vaccinated people, but so far, fully vaccinated patients infected with variants are not dying of COVID-19 at a higher rate, clinicians say.

“People who have been vaccinated can be cautiously optimistic they're protected, but people still need to use judgment,” Kuritzkes said. “We don't know for certain just how much protection there will be if we see rampant community spread of variants.”

What is currently unknown about variants?

Scientists are working to learn whether these new variants cause more severe illness, how easily they can be detected by our current tests, and how effective current vaccines and treatments are.

There is still much to learn. For example, doctors still aren’t sure whether the new strains are deadlier.

“The UK variant is clearly far more transmissible than the variant it displaced,” Kuritzkes said. “But it is not yet clear whether it is a more virulent variant, that is, whether it's more likely to cause severe disease.”

A new study on the UK variant actually indicates the opposite. “We did not identify an association of the variant with severe disease in this hospitalised cohort,” researchers wrote.

In addition, it is unclear whether booster shots will be needed to maintain immunization. Pfizer-BioNTech began its clinical trial for a third dose of its vaccine in February. Moderna has developed a similar shot that would be administered as a third dose. If needed, boosters could be available by this fall. However, both vaccines have shown to be highly effective at least six months after the second dose. Currently, the FDA and CDC believe boosters are not necessary for fully vaccinated Americans.

“We'll only know for sure about future need for vaccines as we continue with surveillance efforts and follow data from trials,” Kuritzkes said.

The federal government is ramping up efforts to study current and future variants. The Biden administration announced a $1.7 billion investment that will go toward sequencing the virus’ genome – examining its DNA to detect new mutations. Since February, U.S. labs have increased their sequencing from about 8,000 COVID-19 samples each week to 29,000 samples each week.

“The emergence of these variants has highlighted the need to use sequencing, so we know what's circulating out there and to be able to track once we see shift in the virus population,” Kuritzkes said. “Otherwise, we're flying blind.”

How can we protect ourselves?

The virus evolves when spread is uncontrolled, so the best way to stop variants is to keep cases down and to immunize quickly as possible.  Because anyone who is vaccinated is far less likely to be infected and transmit disease, each vaccinated person act as a roadblock, preventing further variant spread.

To avoid the variants, Kuritzkes said, people also should take the commonsense precautions that have proven effective.

“We can protect ourselves against the variants the same way we protect against the original strain,” he said. “Get vaccinated. Avoid large gatherings, wear masks in public spaces, and continue to socially distance from people who are unvaccinated.”

PHOTO OF DR. DANIEL KURITZKES FROM BRIGHAM AND WOMEN'S HOSPITAL