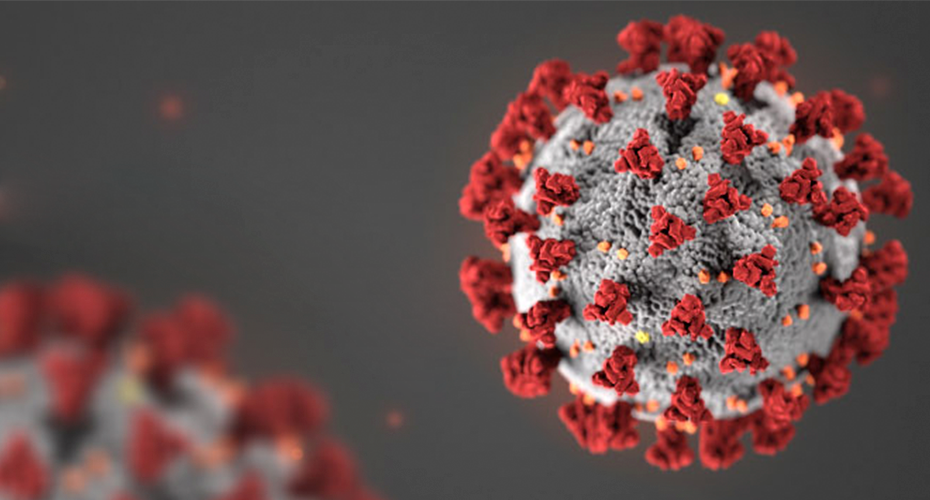 A battle to put the brakes on the pandemic

If Americans adhere to crucial isolation measures, federal officials say, we have the potential to save 'hundreds of thousands of lives'

Note: This article is updated by the Coverage team on an ongoing basis as new information becomes available. Contact Coverage if you have questions about the coronavirus you would like to see addressed by our reporters. Subscribe to our newsletter to get our top 5 headlines weekly in your inbox.

The federal government is asking Americans and their local officials to continue to help slow the spread of the coronavirus by closing schools, telecommuting and avoiding nursing home, travel, bars, restaurants and groups of more than 10 people through the month of April.

Such measures, said White House Coronavirus Task Force coordinator Dr. Deborah Birx, have "the potential to save, really, hundreds of thousands of American lives. And we know that’s a huge sacrifice for everyone. We know it’s a sacrifice for every mother and child and father who’s also self-isolating. There are people that have to go out to work, and we know the compromises that they’re making. But it’s all to protect not only Americans, but the health care providers that are on the frontlines."

In the U.S., confirmed cases have climbed past 200,000 as both testing and transmission exponentially increased in March. More than 5,000 have died.

"It's our responsibility to protect the vulnerable. When I say protect, I mean right now. Not wait until things get worse."

The focus now is on slowing the spread of the virus -- now a pandemic past the point of containment -- to prevent a massive spike in cases that could overwhelm the country's health care system, infecting health care workers and making it impossible to care for other patients.

"It is correct that the infections are going to go up," said Dr. Anthony Fauci, director of the National Institute of Allergy and Infectious Diseases in a recent interview. "Our job is to make sure it doesn't do the maximum peak and actually blunts. Within that blunt there will be many new infections. We want to make sure we don't get to that really bad peak."

Without such strict measures, known as "mitigation," the U.S could see up to 2 million deaths, Birx said. With mitigation measures, models show the U.S. is likely to see between 80,000 and 200,000 deaths before a vaccine is developed in the next 18 months.

"In that model, they make full assumption that we continue doing exactly what we’re doing, but even better, in every metro area with a level of intensity," Birx said.

The virus, named COVID-19, causes a dry cough, headache, fatigue or fever in some, but can lead to severe pneumonia in approximately 15% of cases, and can be fatal for 1 to 2 percent of patients. As of March 31, nearly 900,000 people have been diagnosed on four continents, and more than 41,000 deaths have been officially reported. Researchers are working on producing anti-viral treatment, but none is currently available.

Nearly 7000 cases have been confirmed in Massachusetts, where a state of emergency was declared on March 10. The state Department of Health has set up its own website to provide information on the virus. The Boston Public Health Commission also has set up a website to provide up-to-date facts as well.

Fauci said millions of tests are being distributed to state public health departments to allow testing by individual physicians of their symptomatic patients, as well as "surveillance screening" of wider populations.

"Both of those things are going to be going on now at full speed," he said.

One clinician’s view of the coronavirus

Testing is done at the discretion of clinicians and state health departments. Currently, the Massachusetts DPH states testing can be done at the state lab for patients including: symptomatic health care workers who are caring for patients; patients who have a cough, shortness of breath, or a fever and have traveled to China, Iran, Italy, Japan, or South Korea; those who have been exposed to a COVID-19 patient; and patients who have a fever and are hospitalized with severe acute lower respiratory illness, such as pneumonia, when there is no other diagnosis such as the flu. Private labs can screen symptomatic patients who live in an area with "community spread" of the virus, which applies to several Massachusetts counties.

"Mildly ill patients should be encouraged to stay home and contact their health care provider by phone for guidance about clinical management," the CDC said in guidance to clinicians. "Patients who have severe symptoms, such as difficulty breathing, should seek care immediately. Older patients and individuals who have underlying medical conditions or are immunocompromised should contact their physician early in the course of even mild illness."

“We don’t want people who don’t fit the exposure-risk criteria to show up at their doctor’s office asking to be tested,” said Dr. Katherine Dallow, vice president of clinical programs and strategy at Blue Cross Blue Shield of Massachusetts. “Blanket testing could overwhelm the testing process and delay lab results on specimens from those truly at risk of exposure.”

Massachusetts' DPH is doing its own testing of patients in the state. Insurers including the state's largest, not-for-profit Blue Cross Blue Shield of Massachusetts, have taken immediate steps to expedite access to care and testing.

In Massachusetts, the governor has ordered public and private schools to close until May 4, ordered non-essential businesses to close their buildings and work remotely, limited restaurants to only takeout and delivery, and banned public gatherings of more than 10 people, including in gyms, theaters and churches. Grocery stores and pharmacies are exempted. In Boston, Mayor Martin J. Walsh has ordered a halt to major business and city construction projects. All trials in state courthouses have been halted except for emergencies.

“Wash your hands often with soap and water for at least 20 seconds, and avoid touching your eyes, nose and mouth,” Colbert said. “Avoid close contact with people who are ill, stay home when sick, cover your cough or sneeze with a tissue or the crook of your elbow – never your hand. Clean commonly used surfaces, especially shared tables and desks.”

No state in the U.S. has fewer than 50 COVID-19 cases currently, and the virus is spreading quickly. 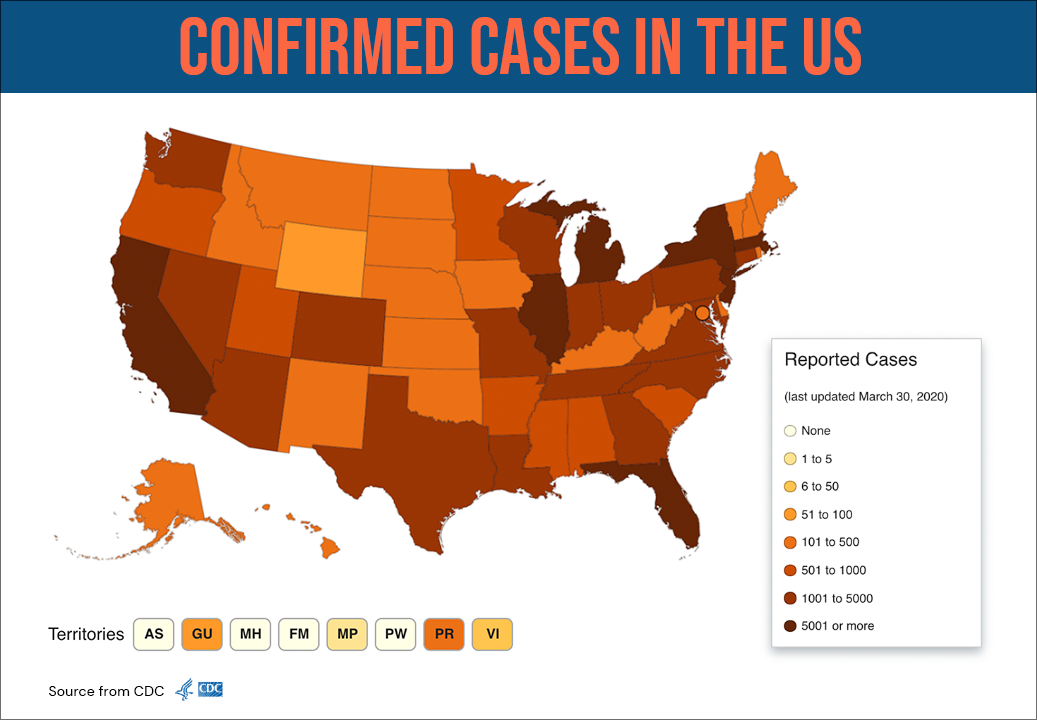 The CDC  is urging all Americans to avoid any non-essential global travel, and is urging residents of New York, New Jersey, and Connecticut to refrain from non-essential domestic travel.

The Trump administration has suspended travel from China, Iran, and most European countries, including the United Kingdom.

"Widespread ongoing transmission of a respiratory illness caused by the novel coronavirus (COVID-19) is occurring globally. CDC recommends that travelers avoid all nonessential international travel," the CDC states. "Older adults and people of any age with serious chronic medical conditions are at increased risk for severe disease"

What is a coronavirus?

Coronaviruses are a large family of viruses that are common in some species of animals, including camels, cattle, cats, and bats.It is rare, but animal coronaviruses can infect people and then spread between people.  Middle East respiratory syndrome, or MERS, and severe acute respiratory syndrome, or SARS, are other examples of coronaviruses that can infect people. The virus is named for the crown-like spikes along its surface that can be seen under a microscope.

“The thought is that this will behave similar to other viruses and is transmitted via respiratory droplets,” said Colbert.

The symptoms of COVID-19 at first look like those of many other less serious infections.

“We’re still trying to understand, beyond just the symptoms you can get with many viruses -- fever, dry cough, shortness of breath -- what is different about this virus that makes this respiratory illness more severe,” said Colbert.

Colbert noted the global health community comes together quickly and collaboratively to investigate such viruses.

“What’s amazing is if you compare the experience with SAR, with MERS, with what used to happen 20, 30, 40 years ago, we’re much more able to respond to do the research to understand how these viruses behave,” he said.

For anyone who gets sick on the road, travel insurance can provide help. Companies such as Geo Blue, whose plans are sold by Blue Cross, can provide health care coverage and access to providers for travelers virtually anywhere in the world.

GeoBlue offers medical, prescription drug, and evacuation coverage, with service 24/7, 365 days a year and 100% coverage for sick visits, emergencies, hospital stays, and more. Plans for single trips start at $5 a day, and plans for multiple trips start at $120 a year, with some plans offering up to $1,000,000 for medical coverage and up to $500,000 for medical evacuation.